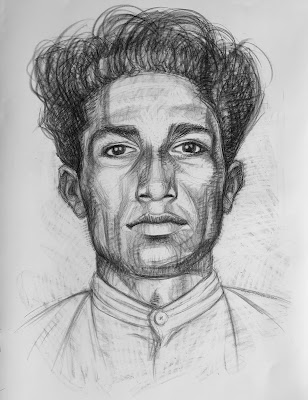 
I moved to Bloomington Indiana in the fall of 2017 to have a go at living with my girlfriend Joann.  Bloomington was a completely unknown and undiscovered place to me.  I got a job as an adjunct at the local community college teaching drawing and printmaking, but I was also interested in a large beautiful Tibetan Buddhist center a couple miles from where Joann lived.  It would be a fantastic opportunity to dive deeper into a path I had been reading on and trying to practice on my own for several years.  So, we visited one day and signed up for their mailing list.  Soon after I received a notification for a Sunday morning Darma talk.  What is Darma, exactly, anyway, I thought?  Sunday morning came, and we drove down the winding wooded drive through the beautiful nature preserve surrounding the buildings, as one would expect of a Buddhist center, to the main temple on the property.  We entered and removed our shoes, as one would expect.  We walked into a room with a huge multicolor alter consisting of a plethora of pictures, flowers and figurines, as one would expect.  We sat down cross-legged and uncomfortable, on the floor pads provided, as one would expect.  There was a small, diverse group of attentive people in attendance, as one would expect.  A short, elderly, bald, Tibetan man with glasses wearing colorful, monkly robes quietly walked down the center isle and took his place in front of the alter and seated crowd, as one would expect.  His young protégé, who looked strikingly similar, followed humbly, at his service, as one would expect.  Prayers and instructions were given, and everyone stood for some traditional chanting, as one would expect, and then we all settled into place.  This is where the expected ended, at least for me.

As the two sat at their places, the protégé opened a laptop and connected via video chat with another Asian man, from somewhere across the world, who was to provide the translation for the monk who sat in real time in front of us, as he did not speak English.  Okay, I thought.  This is a little unorthodox, but here we go.  The eager, middle-aged blonde woman sitting next to me pulled out a legal pad and a pen, poised to take down every word.  So, Realtime monk (that is what I will call him for this story), started to speak in Tibetan, I assumed, and talked for about 10 minutes.  Then he would stop and Virtual monk (that is what I will call him), would translate in a fairly broken, but understandable with sincere effort, accent.  Realtime monk would then bow his head, close his eyes, fold his hands in his cross-legged lap and wait.  My studious neighbor scribbled maniacally.  About the third round of translation, just when one of my legs had fallen asleep and everyone else started to shift in their physical and psychological discomfort, as one does at any Buddhist event, Virtual monk started to emit a slight Buddhist fervor.  He began to elevate his volume, ever so gently, and lengthen his pauses in between phrases to create emphasis.  Everyone’s ears perked just a little and made effort to hold still, as we could sense that something important was about to be revealed.  The anticipation was birthed with the next statement.  “There are 3 things that you should remember about the concept of Darma.” Virtual monk said.  “Crackle, crackle, er, um, eh, blurp, boop, beep” and the internet connection was lost. Small patient sighs and smiles were given as the protégé worked quickly to regain a signal.  As the image and sound returned, Virtual monk continued to talk as if unaware of the interference.  “and those are the things you should remember about Darma”, he said.  Realtime monk silently giggled, shrugged his shoulders and lowered his gaze as his young protégé nervously carried on, and a large, technological weight now sat upon his shoulders

“Oh my god!”, I thought.  We missed the whole answer!  Joann gave me a ‘be polite’ poke in the ribs, as I had started to laugh, silently to myself of course, at the irony of the situation as well as the confused, hovering pen and desperate blank space on the woman’s legal pad next to me.  Not to worry.  Realtime monk began speaking again and after another couple rounds of translation, the waning attention span and physical discomfort returned.  There was a row of black chairs lined up at the back of the room behind the kneeling pads and one by one, my girl Joann included, faithful Buddhist novices began to drop like flies…or rather, awkwardly rise out of their pins and needles pretzel knot on the floor, desperately reaching for the nearest chair behind them to regain circulation.

Then, in the nick of time, once again the Buddhist fervor returned.  Virtual monk raised a finger in emphasis on the tiny laptop screen in front of us.  “The most important thing you must remember about Darma is…Crackle, crackle, crackle, er, um, eh, blurp, boop, beep!” and the internet connection was lost.  We all almost faceplanted in our strained forward listening leans.  Holy crap. Are you kidding me, I thought?  Is this a joke?  Realtime monk’s eyes popped open, and he gave the protégé an inquiring side eye.  Poor protégé maintained his mild temperament, but a restrained panic was definitely detectable at this point as he hopped up and quickly glided to the back of the room, to check the modem.  Monks softly glide peacefully through space apparently, even when stressed or panicked. Maybe it’s the robes.  Anyway, by the time he sat back down, the connection had returned and there was our trusty virtual monk, this time informed of the interruption, but still unphased by the pause in his stream of translation.  “in any event” he continued “those are very important things to remember about Darma”.  Realtime monk squeezed his eyes shut, lowered his gaze and giggled even more.

Oh my god!  I thought, once again.  Seriously? Is this really happening?  This has to be a joke!  My mind was very confused.  Frustrated, physically uncomfortable and extremely amused simultaneously.  I joined Realtime monk and laughed harder too.  Silently, with my hand over my mouth and Joann’s disapproving toe in my back, as she was sitting behind me in one of the chairs.  I could see cartoon heat waves begin to emanate from my neighbor the scribe.  She stopped writing and straitened her spine.  Nervous laughter sprinkled around the room but did not last very long.

Translation continued, and I caved into the beckoning chair next to Joann. We were about an hour and a half in when it happened a third time.  I can’t ever remember the question anymore, but I am positive we did not get the answer, as I watched the same dance of the protégé take place.  The dutiful note taker had stopped writing completely, putting her pen and paper back in her bag in resignation.  I wish I had had the courage to laugh out loud because I began to think that Woody Allen was going to pop out of a closet at any moment.  It really could have been a movie.  We sat patiently through the questions at the end and the invitation to tea and cookies afterwards.  As we escaped to the bathroom, Joann asked if I wanted to stay for tea and cookies.  “Nope,” I said.  “Great!”  She responded. Not only had our patience been spent but we were dying to get back to privacy, so we could ask, what the heck just happened?!

The mailing list notifies me on a regular basis and although I have not been back to another Darma talk, I continue to study Buddhism and meditate on a regular basis.  I have told this story to several friends and I have thought a lot about that question. What had happened, what was that? I didn’t learn anything new about Darma, still can’t tell you much specific about it.  However, the more I think about it, maybe I gained some understanding about overarching questions of enlightenment posed by the comedic turn of events that day.

Most everyone there, I would imagine, may define themselves as a searcher, a seeker, or an explorer of sorts. The general conception, or should I say misconception, of enlightenment, as most people think of it, holds the mystic idea of something to be found or understood or attained.  However, this definition is wrapped in the false disguise of pursuit.   Everything I have read so far, as well as my personal experience, tells me that enlightenment is not something that can be “achieved”.  It isn’t a static state, it isn’t even a “something”, and furthermore it may not even exist.  Pema Chodron says “Enlightenment is not something we're going to achieve after we follow the instructions, and then get it right. In fact, when it comes to awakening the heart and mind, you can't get it right.”  I am not referring to concepts of bliss, the sublime, transcendence or joy, which are all elusive emotional states that I have personally experienced.  Maybe what has surfaced for me while reflecting upon that day is a message that I consistently hear, day after day, which is that all enlightenment is, is a simple acceptance of what is, or what is not.  Acceptance without anticipation, or guilt or resistance of any kind.  Maybe the video chat pauses were the very answers that everyone in attendance yearned to hear.  If enlightenment is truly just acceptance and presence, then surely it is held within the excruciating absence of answers.  Within the musical translation between languages.  Within the humming of pins and needles inside fingers and toes. Within the surrender of one’s pen sword. Within the silence of private internal laughter.  Within those quiet spaces in between connections.
Posted by Gypsy at 4:51 AM 2 comments: